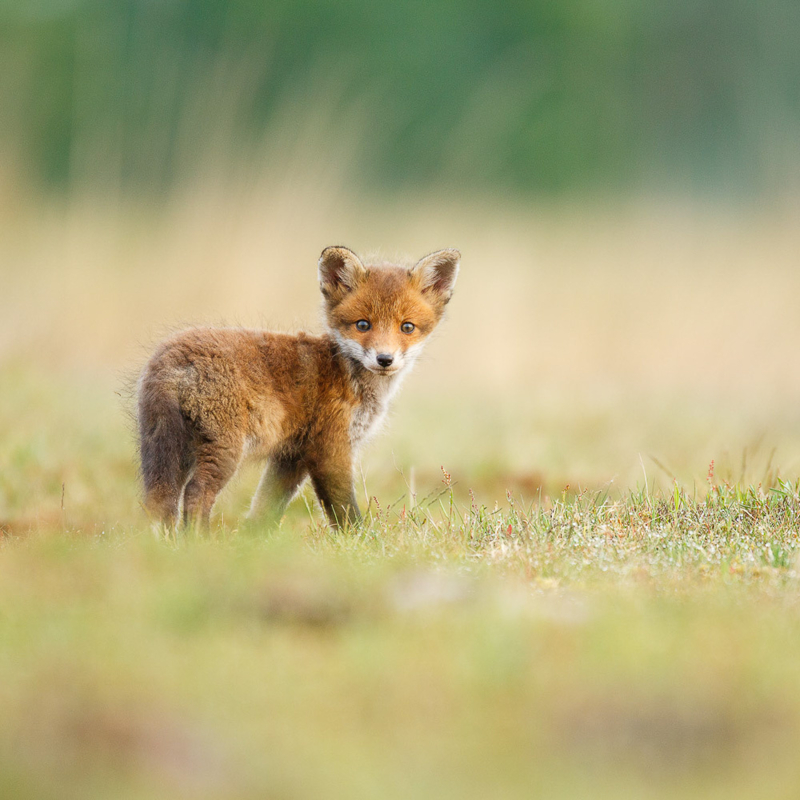 Every year in March, my soul becomes restless. I keep checking online sightings, study Google Maps, and use every available spare hour to search suitable locations near my home. Why? Because at the end of April, I need to know about an inhabited fox den! From around that time, a new batch of fox pups is released into the world. It’s then they leave the safety of the den for the very first time and start exploring the surroundings and catch their first ever rays of sunlight.

Their confidence grows by the day and so does the circle around the den they use to play and explore. Also, the fox pups themselves grow like crazy. Therefore, I want to be there as early in the season as possible, when they still sport that innocent puppy look, squarish heads, lots of long nest hair and they cuddle together near the den entrance. A week later, and they already run around like crazy, jumping each other. Another week, and they have become miniature versions of mom and dad, pointy ears, slim head and long legs.

If I’m lucky, I find a den location and then the game begins. I sit down at a decent distance from the den. Earlier, I have already scouted a handful of suitable places to take position. You’ll need more than one because wind direction determines from which direction you can shoot. The pups don’t care; they have never seen a human before and can even be curious and bold. But when the vixen sees or smells human presence, chances are she will move the pups to another den location, which is usually much harder to find, in dense cover and impossible to photograph.

You never know at what time fox pups might be out of the den. Some experts state they will only show themselves when the sun is already long up, so there’s no need to be out and about at dawn. But from my own experience, I can tell you they can most certainly be out in the open when the sun rises. Therefore, I make sure to be at the site early, prepared for a long, long wait. I don’t bring much, only the long lens and a tripod, a large camouflage cover to hide under (which I call my camoburka) and a small bag with a teleconverter, something to eat, a bottle of water, and my phone to keep me busy during the many boring hours.

Sometimes I get lucky and the pups show themselves before long, but mostly, it takes a long time. If they appear at all. Especially early in the season, when they do not spend a lot of time outside and are still weaned, the den misses the tell-tale signs of flattened grass, fox excrement and prey remnants. It is those days I hate most. When nothing happens, I start to doubt if the den is inhabited at all. A good idea would to install a trail camera to monitor the den activity. In my area however, these tend to get stolen so I don’t install any.

Thus I hang on, try again and again. And just when I am about to give up, I get a small glimpse of a pup moving from one entrance to another in a split-second. I’m left with only a record shot, but it is enough to reset my worrying mind and keep investing a lot of time. As if those damn foxes play their own game; give the poor photographer a tiny bit, a glimmer of hope, just enough to keep him at it. Bastards.

After sitting in the field in the most uncomfortable of positions for hours on end, cross-legged and bent forward, temperature rising by the minute, it would be easy to give up and go home to do something nice. But then another mind trick occurs. I tell myself that the longer I have sat watching absolutely nothing, the greater the chance something is bound to happen. And thus I stay another hour. And another.

Which makes me doubt the location again. If I have sat there for nine hours and have seen nothing, it surely must be a deserted den? How can fox pups not go out for so many hours? But when I do go home and come back another day, I will find chewed-off wings, empty bread bags and fresh black droppings in the sand. A small army of flies around the den entrance is the final clue that they are there. Damn.

And thus I try again and find myself once again staring into an empty black hole. When I do so long enough, my mind will start to trick me and I start seeing things that are not real. A leaf blowing in the wind starts to look like a fox ear. The changing light direction creates shadows in the shape of a fox. The dark hole itself even seems to be moving every now and then. A Photo Morgana, if you wish.

But when it does all come together, there are no words to describe the mixed bag of feelings that overwhelms me. The pure joy of observing these rabbit sized, orange bundles of joy, little rascals jumping each other, or just lying there and being cute. The feeling of gratitude because I have been given the privilege to witness something most people never will. The fear to spook them when pressing the shutter (which is no longer an issue after moving to mirrorless). The fight to stop trembling and actually take a sharp image and not mess up the exposure. The absolute horror when the one twig in the wide surroundings is exactly in front of the pups face. The hurt and numbness in my legs and back from sitting too long in the same position and not daring to move an inch. It’s all there and I could not do without any of those feelings. All necessary ingredients to what makes this game so damn addictive.

At the end of the season, the balance will usually come down to a hundred or more hours spent waiting, and only a handful of images of foxes to prove that they actually do exist. It may not seem much, but it is more than enough to lure me into doing it all over again next year!

Thanks for sharing Marijn Heuts, nature & wildlife photographer from The Netherlands